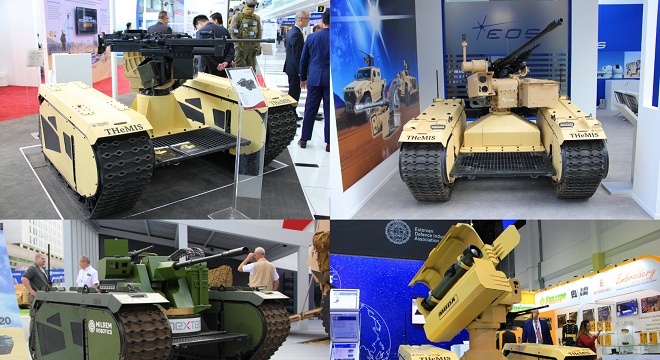 La-Femme ( Milrem Robotics’ THeMIS UGV Strengthens ) – The unmanned warfare systems developer Milrem Robotics is the most represented company in its field at this year’s IDEX with the widest selection of different weaponized unmanned ground systems on display.

On display are two completely new weaponized UGVs – the first anti-tank unmanned ground system in the world and the first UGV with a precise and powerful 30mm cannon. Also, a light 12,7mm machine gun system complimented with a 40mm grenade launcher and one UGV with a 20mm turret are exhibited.

“The high amount of integration projects with different payload manufacturers, such as MBDA, EOS, ST Engineering, Nexter, Kongsberg and FN Herstal and interest from other well-known industry leaders demonstrates that over the past few years the THeMIS has truly strengthened it’s positions as the industry standard UGV,” said General (ret) RihoTerras, former CHOD of Estonia and current President of the Defence Division at Milrem Robotics.

“The THeMIS truly is the swiss-army-knife of ground robots with so many different usage options. Thanks to this it has piqued the interest of several countries in Europe and in the Middle-East who wish to add it to their robotics testing programs and find the best way to integrate the system to their doctrine,” said KuldarVäärsi, CEO of Milrem Robotics.

In the end of last year, four THeMIS UGVs were tested in the United Kingdom during the Army Warfighting Experiment by NATO soldiers. The three-week experiment resulted in very positive feedback and was an example for other similar programs.