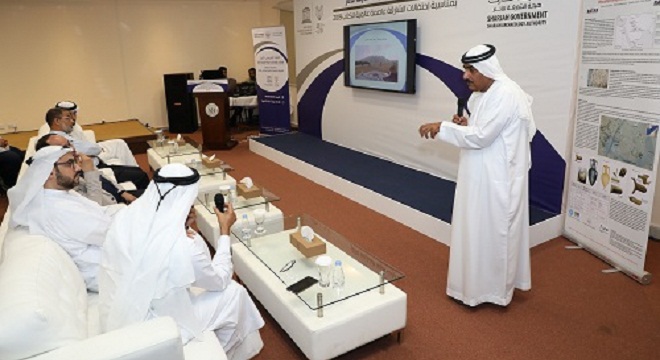 La-Femme (Sharjah Archaeology Authority) – In celebration of Sharjah being named the “World Book Capital City for the year 2019,”the Sharjah Archeology Authority (SAA) on Wednesday morning held an introductory meeting to showcase the efforts of the Emirate of Sharjah in the protection and management of archaeological findings. During the meeting the authority also highlighted the achievements and initiatives of SAA in the field of archeology and preservation of the cultural heritage of the emirate. New publications issued by the authoritywere also revealed on this occasion.

The meeting, which was held at the authority’s headquarters, was attended by MrEisaYousif, Director of the Excavation and Archaeological Sites, and a number of SAA directors, officials and specialists, those interested in the field along with media representatives in the country.

MrEisaYousifemphasised that Sharjah received this prestigious title due to the many initiatives and projects implemented in line with the directives of His Highness Sheikh Dr Sultan bin Muhammad Al Qasimi, member of the Supreme Council of the UAE and Ruler of Sharjah over the last four decades.He added that these initiatives are in line with the vision of his highness, which aim to build a strong human capital and to promote culture, science and knowledge as the basis of progress, development and civilization.

He pointed that SAA is keen to strengthen Sharjah’s position on the archaeological map, through the search and investigation of archaeological sites, carry out excavations, restore and maintain archaeological findings, as they are considered a historical heritage for the human race regionally and internationally.

He stressed that archeology does not only bear significance and historical value, butalso attracts a wide range of tourists who are interested in learning about these values.

Following the presentation of Mr Yousef, the attendees toured anotherexhibition that included a collection of the latest publications of the authority from books and periodicals, on topics specialising in archeology, heritage, history and architecture.

The publications in the exhibition included “Al-Wajeez(the summary) in Early Islamic Architecture,” by C.A. Crozil, reviewed by James Wilson Allen, translated by Abdullah Ali Al-Ruhaibi, and the book “Prehistory and the Geology of the Nearest Modern Age Pleistocene in Qurayniya – Libya” by S. B. Mac Bernie and W. He and translated and prepared byDr. Sabah AbboudJassim, along with a series of periodicals, which is the official magazine of SAA.

The attendees were briefed on the exhibition held annually at SAA, which includes a large number of valuables and rare artifacts discovered since the early eighties of the last century in different locations in the Emirate of Sharjah. They also toured the laboratory where they learned about the methods of examining and restoring artifacts.